Protect Your Profits with the Trailing Stop Loss Tool

Have you ever lost out on a bunch of profit on a good trade because the market suddenly reversed course on you while you were away from your computer? You’re not alone. Fortunately, Olymp Trade’s Trailing Stop Loss tool can prevent this from happening again.

What is a Trailing Stop Loss?

A trailing stop loss is a tool much like the regular stop loss feature for open trading positions. It prevents a trader from taking a loss on a position above a certain amount if an asset’s price goes the wrong way.

Participants in the recent 5 year tournament were the first to receive this tool as a reward for achieving a certain level during the tournament, but additional clients will have access to this amazing feature soon.

The most significant difference in the trailing stop loss from the regular stop loss is that it can help a trader “lock in” the profits they have already made on a good trade without having to close the position or use the “take profit” option.

Additionally, it allows the trader to leave their computer screen or phone without the anxiety that they will lose money if the market reverses sharply while they are away.

How Does a Trailing Stop Loss Work?

The trailing stop loss moves along with the price of the asset that you are trading and it works for both Up (Buy) and Down (Sell) trades on the Forex side of the Olymp Trade platform.

Here are some examples:

You open a trade on Gold at $1450 an ounce with Buy order of $100. You set the trailing stop loss at $10 (10%) of the trade amount. Then the price of Gold starts rising just as you predicted to $1475, but you think it may go much higher and don’t want to exit the trade. Your trailing stop loss moves with the price increase and will now automatically close if your position would lose $10 from the price of $1475.

This is where the trailing stop loss gives you peace of mind. If the price continues to go up, your position is safe because it is still open. Let’s say Gold then hits $1485, but takes a sudden turn and plummets back to $1450. Your trailing stop loss would have sold your position at $1475 preserving your profits even if you weren’t at the computer to observe it.

This works the same with a Down (Sell) position.

Your trailing stop loss would’ve closed your position at $1445, which would have preserved some profit for you despite the quick reversal in the price.

Here are a couple other things to consider when using a trailing stop loss.

Additionally, even if you’re at your computer or phone, if you have many open positions in different markets, you might get burnt on a sudden price reversal because you weren’t quick enough to catch it and close the position.

Lastly, make sure to turn on the Stop Loss/Take Profit feature in the settings menu on the platform in order to take advantage of the tool. 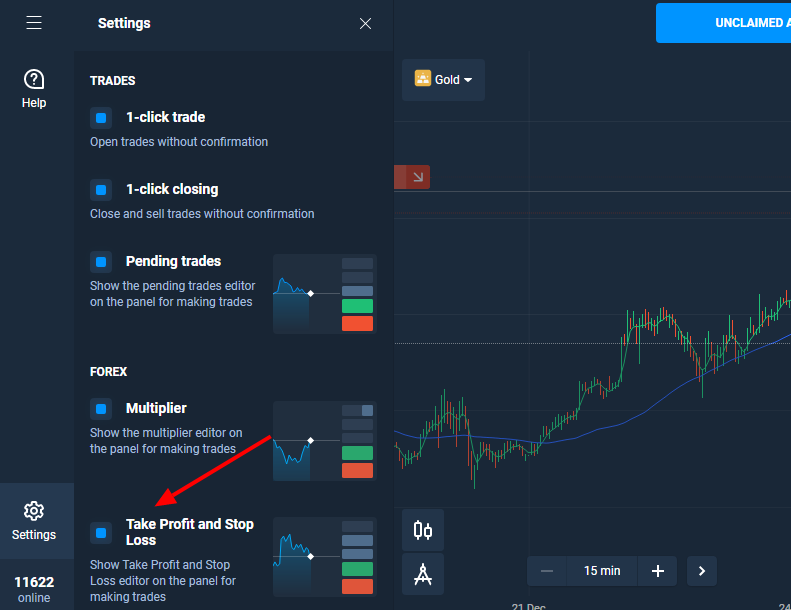 Olymp Trade continues to provide the very best in professional tools and resources for its clients and the Trailing Stop Loss tool is another powerful example.

Team includes professional authors, analysts, and expert traders with a genuine interest in both trading and sharing their expertise with you.

When is It Best to be Active on the Forex Market?

How Can One Best Use the Simple Moving Average?

How to avoid losing money in Forex

How Leverage Works in the Forex Market

How to create a 24 hour Forex market trading strategy

Forex No-deposit Bonuses: How Much Is “Free Lunch”?