The “Moving average” indicator (for professionals)

In this article, we will focus on the accurate professional setting and calculations of the indicator “Moving Average”.

This is the general formula for calculating of the moving average:

— the value of the weighted moving average at the point t;

Normalizing of the weighting coefficients means that:

— is the weighted coefficient of the “t-i” value of the original function.

The value of the function is usually taken using the quote of the closing price. Moving averages can be reconstructed on the basis of the other points (opening quotes, max, min, averaged values, etc.). This can be done in a separate technical analysis window.

The values of the weighting coefficients

determine the type of the moving average.

The number 1 is always used as a weight.

1. The final formula is equal to the simple average of the arithmetic values:

An exponential function is always used as a weight. Weights decrease exponentially and are never equal zero. It is defined by the following formula:

can be chosen arbitrarily in the range from 0 to 1.

For example, it is expressed by means of the value of the smoothing window:

Let’s calculate the 3 point moving averages and see how they differ.

What we need for calculation: 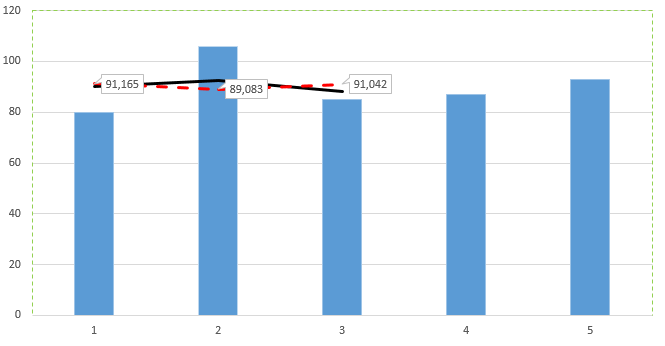 The graph shows that the EMA (the red dotted line) smoothes the strong deviations in the price, and the SMA (the black line) is guided by them.

There is quite a large number of different types of moving averages:

Moving averages are one of the simplest, most effective and important indicators for market analysis. Many other indicators are based on them:

• the Bollinger Bands are based on SMA with a period of 20.

• the MACD is based on EMA.

• the “Alligator” is based on SMMA, etc.

That is why one should start getting familiar with the work of other technical analysis indicators with moving averages.

What are Technical and Fundamental Analysis?

What is Fibonacci and How Do You Use It to Trade?

How to Read and Trade on Simple Chart Patterns

How to Use the ADX Indicator in Trading

What is Kagi Сhart and How to Use It?

WhatsApp Scam: How To Stay Safe

Investing Vs Speculation: The Main Difference